or maybe ‘clarifies’ would be a better choice of word. because if anyone was confused about what donald trump’s reality-show-as-politics, WWF candidacy means for the u.s body politic, last night should have put that confusion to bed.

trump is, at the very least, a proto-fascist. i say this as someone who always pushes for precision in language and is loath to use the f-word simply for dramatic effect. but look at trump’s naked appeals to racial hatred and mistrust. his political demagoguery and pathological dishonesty. his nostalgic promises to recapture a purely chauvinistic and racialized national greatness. his promises not just to deploy the military but to send it to commit war crimes. his blatant xenophobia, which has even included calls for inverted concentration camps in ‘the wall’ and his proposed ban on muslims entering the u.s. his (frighteningly successful) efforts to create a cult of personality around himself, complete with pledges of fealty and all-too-familiar hand salutes. 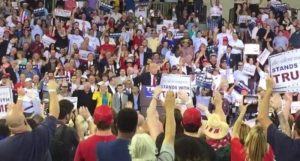 and, as was on stark display last night, his incitement of mob violence.

in some ways, that’s the most dangerous, the most frightening, the most unprecedented aspect of his campaign. i’ve certainly never seen a viable presidential candidate appeal to grassroots terrorism as trump has been doing. he thinks mob violence against those who disagree with him is ‘very, very appropriate’. he longs for the days when opponents would have left his events on stretchers and wishes he could be the one  punching black people in his crowds. and the crowds are responding.

can you imagine what this man would do with the FBI, the CIA, the NSA, the marines, the army—hell, even the national park service—at his command? the smart money is on him graduating from proto-fascism to the the fully mature variety. after all, the only boxes he’s yet to tick off are those that require state power, like the suppression of liberal democracy or the use of military and police to squash dissent.

so what do we (and here i’m speaking to the left) do in the face of (proto-)fascism?

chicago just showed you. we smash.

i can’t say enough about the people of chicago. shutting down trump’s rally was like the first time rocky draws blood against drago in the jingoistic, cold war classic rocky IV. what once seemed a massive, unstoppable force now looks life-sized. vulnerable. human.

chicago, you are totally my hero right now. i hope the whole country takes its cue from what you did yesterday.

and before anyone jumps to conclusions about what i mean, i am certainly not encouraging fisticuffs. not only would we surrender the moral high ground, but our forces will almost certainly end up on the worse end of any violence. and shutting down trump events won’t be enough. we need to mobilize a broad alliance that can fight on many fronts. but we need that chicago spirit, that willingness to put it all on the line to stop fascism from advancing even one more step, one more inch, one more word. we need it to infuse every action the alliance—for our purposes, let’s call it ‘the people’s front against fascism and war’—takes.

and i don’t want to hear any noise about trump’s ‘right to free speech’—never mind that his wall-to-wall coverage in free media means he has the most unfettered speech of anyone in the world right now. and i don’t want to hear from pundits about how protesters should have left quietly after they’d had their say, that it’s wrong to ‘shut events down’. every powerful movement must be able to both create and disrupt. and i can think of nothing better to disrupt than klan fascist trump rallies. and don’t come at me blaming protesters for the violence that has become endemic to trump crowds and events. trump has incited violence and his crowds have initiated it, time and time again.

donald trump has created a toxic, circus climate that has the stage set for a huge political showdown. the next eight months will be madness unlike anything since watergate, or the 1968 DNC, or maybe the mississippi freedom democratic party. we’re already seeing spontaneous, ephemeral resistance to trump from the masses. the energy and insight of even a few of us with more experience and a more developed critique of the political and economic system could have a huge impact, could be a multiplier for that resistance.

i hope we are up to the challenge. i hope we can live up to the example chicago set yesterday, march 11, 2016.