APPLES TO APPLES VIII: so much apples

APPLES TO APPLES VIII: so much apples

i know, i know. this has taken forever. sorry. i promise the net one will not be so long in coming.

this time we have EIGHT varieties of apple to go over. i hope you’re hungry. as usual. all eight come from devoto gardens, though the next installment will feature apples from another farm. till then though, you’ll have to make do with the spitzenberger, best ever, rome, winesap, fameuse, sierra beauty, davisson, and swaar. 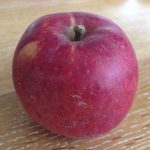 they say the spitzenberger was thomas jefferson’s favorite apple, and i can see why. i may have my problems with him, but i can respect his love for this crisp and flavorful little fucker. it just has a lot going on, sweet and tart in a beautiful dance. 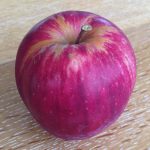 it’s a hard name to live up to, but the best ever…well, it fails.

it’s not the WORST ever. it’s not even a bad apple. but it’s not the best of this batch, much less the best ever. it’s sweet, with a hint of spice. the texture is between crisp and creamy. it’s not mealy, but it also isn’t sharply crisp. it’s juicy, but still a bit subtle flavor-wise. 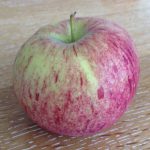 this is a very firm, dry apple with a subtle, sweet flavor. it’s dense with a thick skin. it is known as a cooking apple, and i can believe it. the firmness would hold up under heat, and the run-of-the-mill flavor would improve, and likely mixed with other ingredients.

all in all, not worth getting as an eating apple, but i may try cooking with the two i have left.

the verdict: PUT THESE IN YOUR OVEN. 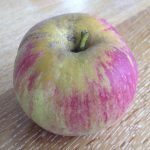 wow. for some reason i didn’t think i was going to be that fond of winesaps, but they surprised me. they have a great texture, very crisp and firm. and the flavor is intense, complex, sweet and tart and spicy. the skin has a bit of a bitter bit to it, which adds to the complexity of the flavor. 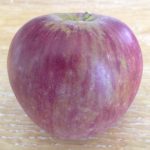 this is a decent apple, but it didn’t knock my socks off. nice texture, crisp and a little dense. pleasantly juicy, with a sweet flavor that doesn’t overpower you. but not a hint of tartness to it, leaving the fameuse a little on the bland side.

maybe i’ll give it to mario and see how he likes it. 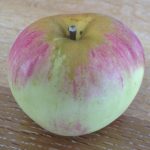 this local(ish) apple from boonville (love that place!) is awesomely tart and crispy. tender and juicy, the only real weakness i see is a thin skin. i like skin that’s a bit heartier. but i am digging it, and will definitely buy more next week.

mario, stay away from these. 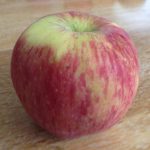 this big fucker is crispy and sweet. and big. the flavor has a bit of cinnamon or something to it that gives it a bit more complexity than i gave it credit for on the first bite. tender and juicy. you know, i’m now halfway through this apple and i like it more with every bite. it’s dense but still juicy. it has a substantiality to it that i like.

for an apple pretty far on the sweet side of the spectrum, this is pretty good. 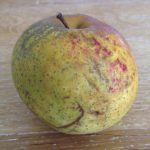 the swaar is quite distinctive. it is incredibly dense and firm, almost woody. it’s closer to dry than to juicy, with a sweet, almost floral flavor. i can’t figure out what it is, but i’m just not crazy about this apple. frankly, this edition of APPLES TO APPLES took as long as it did because i didn’t feel like reviewing this apple. but here we are.